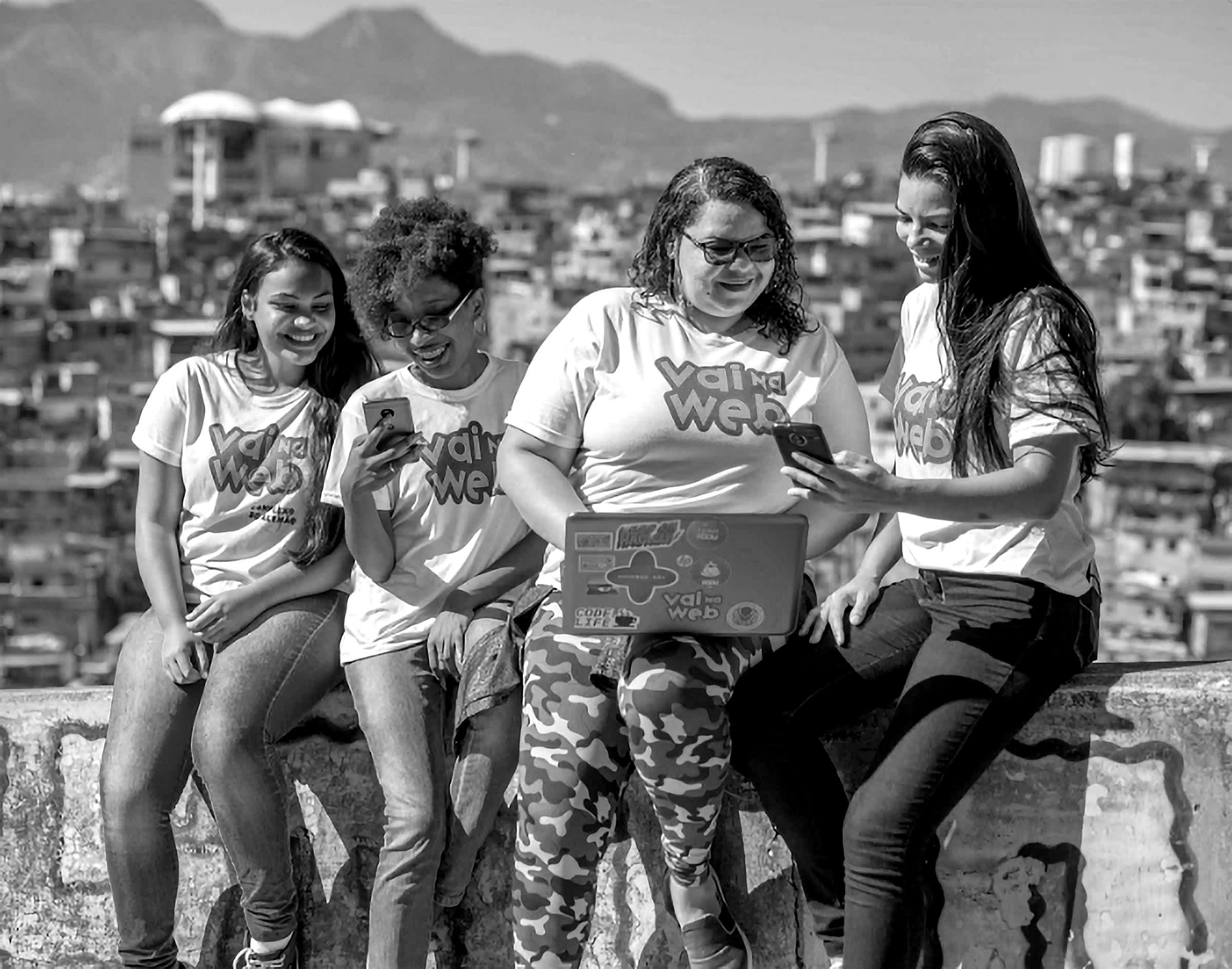 Lenny is born and raised in Brazil. Knowing the situation of the Favelas, he describes them as a world in-between "City of God" and "Elite Squad".

"There are many problems. The environment is controlled by drug dealers. The easy option is to become also one, the hard one is going to the market and take the worst job to survive".

Historically Rio had a good economy and the city was developing. But from 1940 until 1970 there was an uncontrolled migrant movement from all over Brazil into the cities. It was hard for the migrants to find work and to live a decent life. Lenny advises watching " City of God " to get a picture of the life in the favelas. It describes the context of how the favelas were created and how it becomes what it is today.

"The most accurate movie about this reality. Every favela has its own reality. Some are controlled by the drug traffic, others by the police militia. Or watch "Elite Squad". This Story is based on a book, written by the head of a police lead working in the favelas."

When his last company "1STi" started a social project in the favelas, he was "on fire". They created VaiNaWeb.

And what is VaiNaWeb now?

VaiNaWeb wants to offer socially vulnerable people from the favelas a perspective, an alternative way to the drug dealer. For this, they offer free programming courses. free courses! The people stay 1 to 2 years with VaiNaWeb and study. Along the way, VaiNaWeb takes real projects so that students can test and expand their knowledge on real projects. "The best learning is on projects" This also increases the chance that they will be hired afterward. Which actually happens relatively often. "We are trying to do something and help does teenagers."

How is it structured?

At first, VaiNaWeb had different campuses in different favelas. However, each favela is a world of its own and has its own rules of the game. So it happened that students sometimes could not visit their campus in the favela because it was too dangerous. Due to the various circumstances, riots, etc., it has been reduced to one campus. There VaiNaWeb has two rooms: one for courses and one for working. The courses are also streamed so that people can participate from different places.

How is it financed?

Financially, VaiNaWeb is supported on the one hand by partnerships or sponsors. On the other hand, however, also by the projects accepted during and after the studies. The students work there, learn, and thus also contribute to the financial maintenance of the campus. Of course, they also receive a salary. The teachers also get a payment. A few of the first students became teachers at the campus afterward.

To participate in the courses, there are computers on campus. Also to work on the projects. Most students only have a smartphone at home and few have a computer. VaiNaWeb tries to equip them during their studies so that they can learn and not be hindered by external circumstances.

"We try to facilitate and give them what they need."

What is Lenny doing there?

Lenny was there when VaiNaWeb was founded. "Seeing it being created. I was in the room when it was created, I watched it growing for 4 years".

However, the company could only spare two programmers as teachers and he was not chosen. Lenny was too indispensable :D Nevertheless, he considered himself a supporter. After all, the company was a sponsor and made money with his manpower. So, indirectly, he was already working for VaiNaWeb. However, after two years, he gave his employer a choice, either I get to teach or I leave.

" I wanted to be a teacher since the beginning but I had to go on with my projects. I wanted to do something that will warm my heart. One thing is you know you are working and you know your company is supporting them. I felt like I am part of it, helping with my work but now I wanted to go there. I talked to my boss: "I want to go there. Let me go there or I will leave". We were friends, so he understood. "

As a result, Lenny has now been working there as a teacher since 2021. With his move to Munich to join foobar onsite , he continues to support VaiNaWeb on a volunteer basis.

"Very exciting to know, that I am doing something for others who maybe have no other opportunities".

"The universe aligns it, I was waiting for it. "

So far, only the frontend has been taught there. Lenny is now building a backend course and wants to introduce it before he starts his journey to Germany.

"I am taking 1-2 hours a day, volunteering, helping on a project, and finishing the content for the backend course. I will teach the first year but have someone with me to learn so he can teach the next year."

"I will leave with the sensation that I finished it, leave nothing behind."

Kerstin DietrichPeople Operations Assistant and Active Sourcing
Kerstin has a degree in social work and social science. After gaining insight into various organizations such as kindergartens and elementary schools, she decided to take on a different challenge: recruiting and creating people culture in a digital company. For the past year, she has been immersed in this topic, shaping the recruiting process as well as the company’s daily activities at foobar Agency.
Lenilson "Lenny" NascimentoSenior Software Engineer
Lenny likes to code and experiment with tools. He has unique feelings for Python and Golang but also loves React. We’re not just talking about the front-end library, but also countless react channels he watches on YouTube. His toolset includes almost everything from front-end to back-end to DevOps. Apart from coding he likes to listen but also plays bluegrass music or heavy metal as well as competitive video games.
Share:
All articles

It’s a given that everyone in management today hears about team empowerment and self-managed teams and how good they are doing in an agile context. Of course, when hearing about the type of success others are having doing this, we immediately want to try it out, or you know, wait a bit then be pressured into it in some way or another. And when that happens, as we all humans do, we take a concept that we don’t fully understand and run with it. Either because we’re excited to get stuff done better and faster or because we have to. No matter the reason, we need to understand that there is more to empowerment than we might imagine. In this article, I want to touch on one particular part of empowerment - trust and the need to control or tidy up.
Alexandru Condrea • May 2022 • 4 min read • 45 views
Agencylife

"Developers around the world" - with this series, we want to give you an insight into the lives of our foobar team. Developers today are much more global citizens than they used to be taking up new challenges and switching countries more often: a.k.a expats. What is the life of a developer like in another country? What experiences have fed the curiosity of discovering other countries? Which countries have they already nested in? The stories are individual experiences and do not consequently represent a whole nation. They are just a glimpse of how diverse the world is. Enjoy this little journey and step into someone else's shoes.
Mouna Balghouthi, Kerstin Dietrich • Apr 2022 • 10 min read • 127 views
Software Engineering

The React team introduced Server components in December 2020. Zero bundled size components brought a lot of excitement to users because, in large scale applications, it's a well-known problem. This article will discuss the state of server components and how they can currently be used as an experimental feature in NextJs.
Muhammad Shahzad • Mar 2022 • 3 min read • 122 views
Software Engineering

The 5 Whys is a common technique for root cause analysis. 🕵️ There are plenty of very good articles on the web where you can learn much about how to perform this kind of analysis but let me quickly 🏁 give you an overview of how it works:
Matthias Dietrich • Feb 2022 • 3 min read • 109 views
Business Consulting

Data-driven digital marketing has become state-of-the-art for marketers today. Why? Because it allows marketers to build their strategies and campaigns based on real user insights and data rather than gut feeling and theoretical assumptions. Data protection requirements and the need for personalized campaigns are further increasing the importance of data-driven marketing.
Margit Lugstein • Nov 2021 • 1 min read • 384 views